The AHL Hamilton Bulldogs named former Vernon Vipers forward Hunter Bishop North American Van Lines Man of the year at the Bulldogs year end awards banquet. Bishop now in his third season with the Bulldogs missed the entire 2011-12 season with an undisclosed injury. Bishop played three seasons in Vernon (2005-2007) before playing one season at the University of North Dakota. Bishop then returned to Vernon and played his final season with the Vipers (2007-2008) before playing the next two years at Ohio State University. In 140 regular season games with the Vipers Bishop collected (93-84-177). On March. 18th 2010 the Montreal Canadiens signed Bishop as a free agent to a two year contract

The Molson Cup Award (Given to the player most frequently named one of three stars):

The Flamboro Workhorse of the Game (selected by attending media): 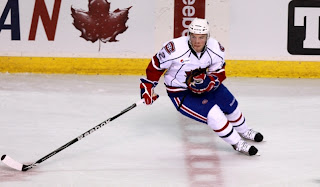