But Teal, 17, spends her winters in Stowe, Vt., at the North American Hockey Academy, where she devotes her mornings to studying with a tutor, and her afternoons and weekends to playing defense for the school’s team, the Winter Hawks.

Ms. Bishop said the decision to send her daughter more than 4,000 miles away to play hockey came down to a single carrot — not a spot on the Olympic team or a professional career, but a top college education. “How many Division I and Division III coaches do you get to know when you live in Fairbanks, Alaska?” she asked.

More students than ever are competing for the limited spots at the nation’s three dozen specialized winter sports schools, which usually accept no more than 30 students per grade. At the National Sports Academy, in Lake Placid, N.Y., which serves skiers, snowboarders and hockey players, the number of applicants has risen to 95, from 77 in 2002. The number of applicants to the new Tamarack Academy, in Donnelly, Idaho, has grown to 25, from 10 in 2005, its first year; at the North American Hockey Academy, it has quadrupled to 120, from 30 in 2001.

“Applicants and interest have skyrocketed,” said Bill Driscoll, the director and head coach of the North American Hockey Academy.

The record level of interest comes partly because parents are more aware of such schools and the unparalleled coaching and training they provide. And more teenaers now choose to specialize in a single sport. But it is the growing awareness that mastering snow and ice can be a ticket to a top college that has more student-athletes applying. When asked about the spike, Mr. Driscoll pointed to his school’s impressive college-placement record — Harvard, Middlebury, Amherst — as well as the competition among top collegiate programs as the primary reasons.

Once, winter sports schools were mainly the domain of those eyeing Olympic gold. But now they are becoming the choice for students and parents who do not expect to see a dime from future athletic careers. They are willing to sacrifice a traditional high school experience and pay up to $35,000 for a few more hours of play each day — and an edge on scholarships or entry into a prestigious college. 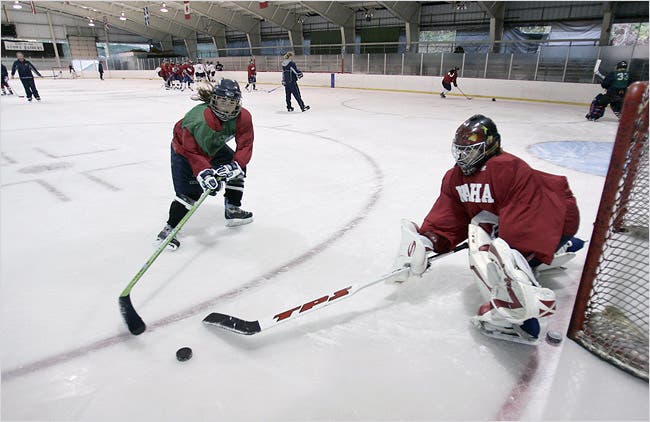 Peter Dodge, the men’s ski coach at Dartmouth, said that all but one of his current roster of 13 skiers attended a specialized sports academy for the easy slope access such schools provide.

He explained the rationale behind some parents’ decisions to send their children to a winter school. “Should I send my kid to Northfield Mount Hermon to compete against 80 percent of his class who are applying to Ivies,” Mr. Dodge said, referring to the boarding school in Massachusetts, “or should I send him to a ski academy of 60, of which 5 might apply to each elite college? Being able to play the skiing recruitment card is a very good way to get an edge, as opposed to just trying to get all your SATs up to 800. It sets you apart.”

The Burke Mountain Academy, in East Burke, Vt., the nation’s first ski-racing school, was founded in 1970 when Martha Coughlin, a ski racer, persuaded her coach to help her study while she trained for a spot on the United States ski team. Now there are about 35 such schools, ranging from nine-month academies to shorter winter tutorial programs, said Finn Gundersen, former headmaster of Burke and alpine educational director for the national ski team.

It used to be that winter sports schools were hothouses where the next stars were created. But now it is only the rare few graduates who win spots on the World Cup circuit, Mr. Gundersen said. Ted Ligety and Julia Mancuso, both Olympic gold medalists in Turin, Italy, this year, attended the Winter Sports School, in Park City, Utah, while Bode Miller went to the Carrabassett Valley Academy, in Maine. “Forget about that small fringe who make the U.S. Ski Team,” Mr. Gundersen said. “The rest go to college, and a lot of them are on scholarships.”

Splitting the year between home high schools and specialized academies can result in logistical headaches. Since the sixth grade, Erin Fucigna, a ski racer, has had assignments from her high school in Hopkinton, Mass., e-mailed and faxed to her at the Waterville Valley Academy, in New Hampshire. “It’s confusing at first and overwhelming,” said Ms. Fucigna, now a junior. “Science is the hardest, because I don’t have the same materials that are available at home.”

Sasha Dingle, the subject of a forthcoming documentary called “Balance,” attended both her local high school in Jericho, Vt., and the Mount Mansfield Winter Academy, in Stowe. “I always wanted to be in the high school play, but I would miss the first part of tryouts,” said Ms. Dingle, who was accepted at St. Lawrence University, in Canton, N.Y. “I felt almost like I was living a double life. Every achievement I made through the winter, I would come back to my high school in the spring and nobody would know.”

Classrooms are by turns unusual and unadorned at winter sports schools since access to snow and ice is paramount. The Winter Sports School holds classes in double-wide trailers near the ski jumps and bobsled track of Utah Olympic Park, while the Mount Mansfield Winter Academy occupies the former Two Dog Lodge in Stowe and has recently converted the sauna and dog-washing area into a pottery room.

Just down the road, the North American Hockey Academy is housed in a chalet. Its classroom setting is informal. In the basement, students and teachers sit in pairs. Thin cubicle walls separate Algebra 2 from History of World Societies. Science class is just an arm’s length away from the Spanish lesson happening near the TV.

Several parents and students said the tiny class sizes often put them ahead of their fellow high school students when they return in the spring. 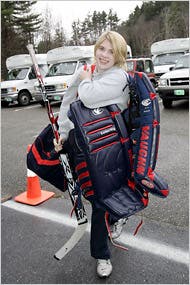 “Teal comes back ahead of her classes here in Fairbanks,” said Ms. Bishop, whose daughter has been inducted into the National Honor Society and this fall earned a full athletic scholarship from Ohio State. “She learns better because of the one-on-one attention.”

Still, not every student at specialized sport schools excels academically, nor are high grades required to win admission. At Tamarack Academy, applicants need only have a 2.0 grade-point, or C, average, said Belinda Brey, a school official. The Winter Sports School requires students to maintain a 1.67, or C-minus, said Rob Clayton, the headmaster.

Rather than focus on grades, admissions officers also consider athletic potential and teacher recommendations that reflect a student’s ability to cope with an untraditional structure.

“We look for students who have the maturity to manage the demanding schedules of on-snow training and class work,” Chess Brownell of the Mount Mansfield Winter Academy wrote in an e-mail message.

Those who are not naturally driven, he added, are often forced to miss competitions when their grades fall below a C-minus average.

Among colleges, specialized winter schools have earned a reputation for producing not only accomplished athletes, but students who can handle the intellectual rigors of a campus. “From an academic point of view, we certainly have a high opinion of ski academies,” said Bob Clagett, dean of admissions at Middlebury College, adding that academy graduates often arrive with extraordinary time-management skills. “They end up being some of the strongest students we have.”

Winter-school students, whose applications are not packed with a variety of extracurriculars, are not necessarily penalized for it. “We far prefer to see a higher level of talent and experience in fewer areas than dabbling in many,” Mr. Clagett said.

Elizabeth Wissner-Gross, author of the guide “What Colleges Don’t Tell You,” thinks the same way. “Colleges now want what they’re calling lopsided kids,” she said. “So, it’s kind of fun, if you do it correctly, to pursue the thing that you really love and would really like to succeed in and at the same time make yourself more desirable to colleges.”